We left Canberra at about 5 pm and headed south, aiming for Cooma. Traffic was the usual on a Friday arvo, some slowbies, some speeders and the usual mix of those who don’t drive as well as they think they do. The Disco towed the van well so no issues there.

Forgoing dinner in Cooma, we continued on through Nimmitabel headed for Nunnock Swamp camp via Packers Swamp Road. Despite a minor miss direction by the GPS, with an excellent sense of direction by Kaylene, we reached camp about 8:30. No-one else being there we had our choice of sites.

We had a peaceful night and rising early(ish) we found it had snowed lightly during the night. Very pretty. We headed for Cooma to do some shopping and to meet up with the rest of the group. On route to Nimmitabel we drove through a light snow ‘storm’ which gave the pine trees lining the road a very white Christmas look.

Due to circumstances beyond our control we did not meet the group in Cooma but caught up with them back at Nunnock camp where they had mostly finished setting up their preferred choice of accommodation.

Stuart and Jane were first to the meeting spot, chatting to a guy in a 4×4 that as it turned out, was not a part of our trip, but just a random guy waiting for his 4×4 mates at the same place!  Rick arrived next and being new to the club, introduced himself to us.  Rick was closely followed closely by John.  Angus and Susie sent their apologies as they had sick children, saying they would try to meet up with us on Sunday. We chatted for a few minutes then headed down to Cooma.  We gathered at the usual haunt (Maccas).  After refuelling we headed off to camp to meet Koppes.

Once we set up at Nunnock’s camp (John braved a tent) we drove out to Alexanders Hut.  At the hut, the group decided that as we had a bit of time, we headed along the Cattleman’s Track and turned onto Mogilla Track.  We discussed how long we would drive for before turning around and heading back to camp.  We decided on an hour.  About 2 minutes later, we came across a fallen tree blocking the track!  After some deliberation, it was decided we do our civil duty and clear the track.  As it was already getting really cold, Kaylene supervised from the Disco 2 and Jane supervised from the ground, with Camera in hand, whilst the men all bonded around chainsaws (1 electric, 1 petrol), an axe (very sharp!!) and a shovel (which used for more than just to lean on, lol!)  About an hour later, that track was cleared and Stuart and John drove through and about 50 m down the track turned around and drove back through! By this time we were all half frozen and wanting to get some warmth from the fire.  Unfortunately we couldn’t due to total fire ban, so we all cooked out meals then gathered around the table for post dinner snacks, before heading off to bed early to get warn…  Koppes kindly donated a quilt to John who was the only one braving a tent on this trip.

What a beautiful day after all the cold.

The group headed down the tracks to connect with Postman’s Track and bumped our way down into Postman’s Camp. A gorgeous spot to enjoy our morning tea and of course enjoyed the water crossing again. A group went through that didn’t have any concerns with safety with a number of adults, kids and dogs riding the track in the back of a 1 tonne ute. After packing up mornos we headed off bumping up out of the camp and heading on to Cathcart (we loved Cathcart so much that it is now on our list of possible places to retire). We enjoyed lunch in the park/sports ground where the community group has been putting in a lot of hard work to make a great community spot with fabulous amenities. We also attracted some attention with two of the locals (of the four legged variety) joining us. They were very polite and very well behaved.

What a great trip. Thank you to Stuart and Jane, and to Rick who lead stage two of our Sunday trip

After a relaxing lunch in the park at Cathcart, we headed south on Coolungubra Road along the logging roads of the state forest. Fortunately, there were no logging operations today so we did not encounter any logging trucks. The road was elevated at about 850 metres and had good views either side. To the west the snow covered main range could be seen in the distance.

Turning left at Wog Way we headed for Myanaba Gorge. By this time we had left the state forest and re-entered the SE Forest National park, once again driving through magnificent tall gums. A Superb Lyrebird was spotted scarpering off into the bush before we arrived at Myanba Gorge. Interestingly, we stepped out of our cars onto a paved path that lead to an elevated walkway overlooking the gorge. While only a small gorge, it was nonetheless a beautiful and pristine place. Paul, John and Jane checked out the gorge walking track before we headed back to the vehicles.

As we returned to Coolungbra Road, the group briefly stopped at Waratah Gully campground, which looked like a good spot to base a future trip to the area.

Travelling north from Cathcart on Creewah Road was an almost surreal experience. Given the dry drought declared country we had been travelling through, suddenly we were driving past green pastures with fattened cattle grazing on one side of the road and sheep grazing in amongst green lucerne on the other. A fast moving police Pajero was about the only traffic we encountered on this 2WD road which lead us through Bibbenluke and back to our camp at Nunnock Swamp via New Line Road and Packers Swamp Road. The wind had dropped at the campground and the temperature was heading south quickly. A few nibblies as the sun set was followed by dinner and a quick chat at the picnic table before we had another early night in order to stay warm without the benefit of a camp fire.

Well, all good things must come to an end, so we all dragged ourselves out of our mostly warm caves and packed them up for the trip back to Canberra.  Considering we all had different set ups, we all packed up in a similar timeframe.  We left behind the “total fire ban” signs (that were in place in -2 degrees) and the camp which was now sunny but still very cool conditions. 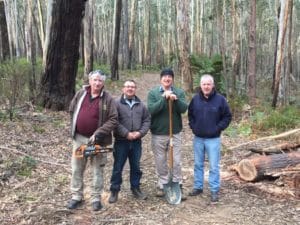 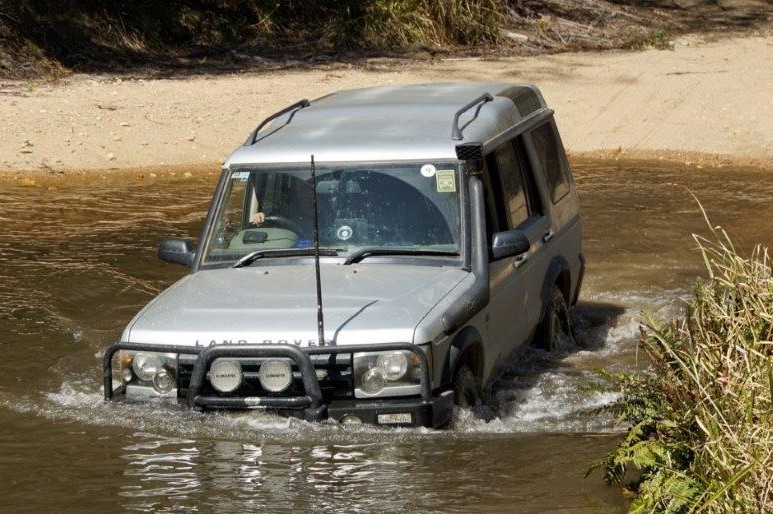